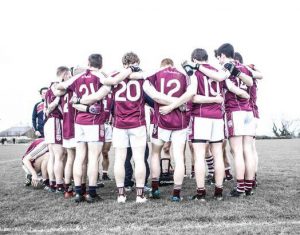 In a very open and competitive game of football, Carryduff emerged the stronger of the two teams, with some key Carryduff men making the difference between the sides. In the opening period both teams had plenty of chances, Carryduff opened the scoring in the first minute with a well worked goal. After that both teams settled into a good attacking game, with Carryduff hitting 8 points and Bredagh registering 5 points on the scoreboard. Bredagh points coming from Conal O’Rawe, Stephen Doherty, Chris Savage, Nicky McCafferty and Bryan Rice. HT Bredagh 0-05 Carryduff 1-08

The second half followed a similar pattern to the first, Carryduff hit a superb early goal by Eoin McCabe and the teams traded points thereafter. Bredagh scores coming from Nicky McCafferty (0-2), Ben Scullion and Bryan Rice. Good performances from debutants Feargal Nolan and Mike Dempsey on the Bredagh team, who were solid in defence. Despite trailing on the scoreboard throughout the game, the Bredagh lads kept working hard through to the final whistle.