Bredagh senior hurlers sponsored by Used Cars NI proved today that they can compete at senior level in Down when they were unlucky to lose out by a single point AET against Ballygalget in an enthralling contest at Carryduff on Sunday afternoon. The Ards men travelled home mighty relieved, their blushes having been spared but on reflection the better team lost this game. Ballygalget lived off frees (many of the soft variety) Magic Johnson hitting 1-11 from the places ball. That left just 0-9 from open play compared to Bredagh’s 1-13.

Bredagh had hero’s all over the field as they played with intensity skill and teamwork. Ian Galway was excellent in goals, pulling off some fine saves and  firing out long and accurate puckouts Michael Woods did a brilliant man marking job on Ballygalget dangerman Johnson. Cornerbacks, Laurence Smyth, playing against his old club, and Oran McFlynn never put a foot wrong and totally negated the threat of Ballygalgets inside forward line. Cormac Hughes on his return from injury was inspirational at centre back winning a lot of possession and driving forward taking the game to the opposition. His wing men Chris Ferry and Niall McFarland also put in fantastic shifts. The superb work rate of Deccy McCarney and Mark Patterson meant that they shaded the midfield battle. The Bredagh attack ran riot and Ballygalget found it hard to contain them. Sean Hughes, Ronan Costello and Joe Hanrahan scored some cracking points from play. Donal Hughes grabbed the goal just before the end of normal time to put Bredagh a point ahead and it looked like history would be made but big Magic pointed with the last shot of the game to leave it all square and take the game to extra time. Ciarán McMullan and Michael Napier also played their part in a very potent forward unit. Subs Liam Hogan and Matt McAreavey really played their part when introduced, Matt firing over a great point in extra time. Bredagh took a 2 point lead at the start of extra time and were well on top but their cause was not helped when Donal Hughes received what appeared to be harsh red card and the extra man in the final minutes helped the Ballygalget men to squeeze over the line by a single point.

The boys really did themselves and the club proud today with a performance that shows that they can live with the big guns in Down hurling. Next up will be an away game against Portaferry next Sunday and Bredagh will hope to reproduce this performance 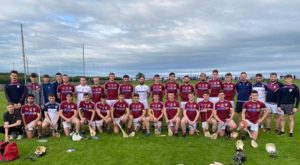